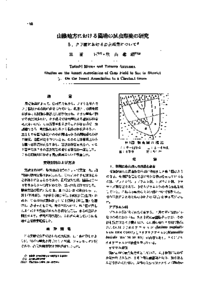 d0020015n014.pdf 1.19 MB
Description
The present studies were intended to explain the faunistic composition and its seasonal change in a chestnut grove. The investigations were made from April to July, 1964 in Shimane prefecture. The results are summarized as follows :
1. The composition of the major species in the chestnut grove are shown in Table 1.
2. From the analysis using the law of geometrical progression (MOTOMURA, 1932), it was evident that the composition of the insect community was quite simple in Apeil and complicated community was recognized in May and June.
3. The importnant injurious insects in a chestnut grove in spring were Myllocerus griseus, Lachnus tropicalis, Myzocallis kuricola, Dictyoploca japonica, Anomala rufocuprea.
About This Article
NCID
AN00108241