Studies on Some Characteristics of the Runoff in the Lake Side(II)
Fukuma, Jun
Shirataki, Yamaji
Suezawa, Yosiyasu
File 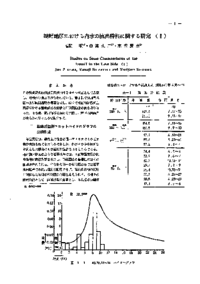 d0020015n041.pdf 596 KB
Description
The hydrological observation have been carried out from 1963 in Hikawa district near Lake Shinji Shimane Prefecture with an attempt to make clear the runoff characteristics of low land by the lake. This paper is the second report dealing with several ploblems which gave rise to discussion in process of the runoff analysis, and should be evidently explained with clear interpretations in the successive reports. It was summarized as follows that :―
(I) Various unit hydrographs are derived from the hydrographs issued by the rainfall classified on the base of amount : below 50mm, 50mm～100mm, 100mm～150mm, 150mm～200mm, above 200mm. It is found that the transformation of each unit hydrograph according to the classified rainfall seems to have no regularity to be generally recognized.
(II) The infulence of the backwater by pumping is plainly noticed at the end of the drainage cannal : The hydraulic gradient in the cannal is infulenced with pump operation. Therefore the observation of runoff at the end of the cannal is unexpectedly difficult on account of the hydraulic gradient alternation.
(III) The values of the runoff coefficient obtained for each rainfall are considerably larger than generally expected in low land. This is able to be considered the overdrainage by the pump operation.
About This Article
NCID
AN00108241