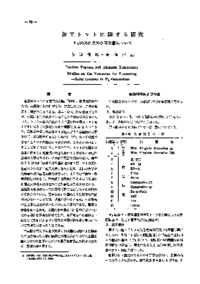 d0020015n007.pdf 1.51 MB
Description
The problems arising in the breeding of tomato plants for processing have been brought foward by us since 1958. And this report deals with a study of the variation of solid contents in the F_1 generation on the breeding of varieties of high solid contents.
(1) Investigating F_1 hybrids of 27 cross-combinations between either of 11 common processing varieties, the higher solid contents showed dominance or rather heterosis. No difference was found between solid contents value of F_1 hybrids in 3 reciprocal crosses.
(2) In 6 cross-combinations using 2 wild strains, West Virginia Accession 36 and W. V. A. 700, of high solid contents as male parents, F_1 hybrids showed partial or complete dominance with respect to solid contents.
(3) In the investigations done in three times, early, middle and late in August, there was a little tendency showing more in late than in early with both parents and F_1 hybrids of crosses mentioned in above (1) and vice versa with those of crosses above (2).
About This Article
NCID
AN00108241