Studies on the Distribution of Micro-fungi in Pine Forest Soil(2) : Fungal Distribution on Different Substrates in Litter and in Root Region
Ishii, Hiroshi
File 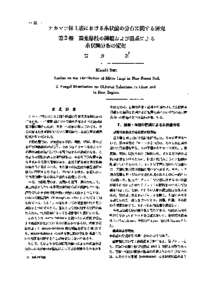 d0020015n025.pdf 806 KB
Description
To know what differences are detected on the divergent substrates in pine forest litter by dilution plate method, litter was separeted into pine needles, broad leaves, branches and barks and then the fungi were isolated from these substrates(TABLE. 1).
It appears that different substrates influence the fungal distribution in litter but further investigation will be needed.
The rhizosphere effect on fungal distribution in the soil was examined in F layer and mineral soil horizon. (TABLE. 2).
Its effect was greater in mineral soil horizon poor in organic matter than in F layer rich in it.
It seems that the soil fungi can be classified into three groups, i.e. one which is much affected by roots, one which is affected by roots in some degree but prefers organic matter to roots and one which is not affected by roots.
About This Article
NCID
AN00108241