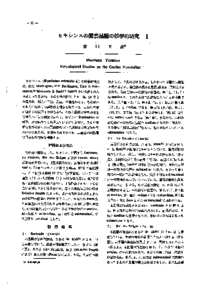 d0020015n020.pdf 1.5 MB
Description
1. This investigation was carried out to decide on the karyotypes of four garden varieties of Hyecinthus orientalis L.: Gertrude, La Victoire, Roi des Belges and Prince Henry.
2. All the four varieties investigated were diploid and had the same number of chromosomes, 2n=16.
3. The four varieties showed much the same karyotypes, though slight variation was observed in them.
4. Their karyotypes are expressed in the fourmula, 2n= 16 = 8V + 8j. A pair of V chromosomes had a secondary constriction.
About This Article
NCID
AN00108241