On the Drawbar Pull of the Tractor having the Deflection Angle
Tanabe, Hajime
Nakao, Seiji
Iwao, Toshio
File 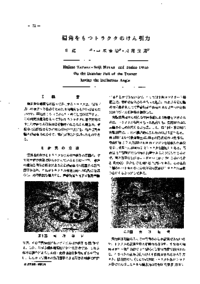 d0020015n046.pdf 1.9 MB
Description
To find out the running and the drafting character of the tractor wheel having the deflection angle in the travelling direction, we studied on the traction force and the side force on both the drive axis attached the differential gear or not. The test was carried out under the condition that the traction force worked at the center of axis.
In the case of pulling the tractor with another one, the traction force needed─ traction resistance─is expressed in eq. (1), and the side force is eq.(2). The side force is obtained by the revolution of wheel. The coefficient of side force must be correct with fig. 5, 6 and 7, when the axis has the differential gear and yet the each wheels, right and left, weigh difference.
When the test tractor drives by himself pulling some of loads, the maximum traction force and the side force are expressed in eq. (7) and (10) respectively.
The traction force and the upper deflection angle by which the tractor can travel along the contour line on the slope field can be get through eq. (5) (6) (7) and (11). The calculated results are shown in fig. 11 and corresponded nearly to the another experimental data by auther using 4 wheel tractor on the slope fleld.
Hence, we shall be able to forecast the drafting character of tractor on the slope field by knowing the coefficients of adhesion, maximum side force by pulling it and friction between tire and groung on the plane field.
Where
α ; Deflection angle
θ ; Inclined angle of slope field
λ ; Ratio of weight difference in each side wheels, right and left
D ; Traction resistance
Sr ; Side force in pulled wheel
P ; Traction force
Sp(n) ; Side force in drive wheel
K_1-K_7 and A, B, C ; Coefficient
W ; Weight on the wheel
H ; Downward force of tractor along the surface of slope field
About This Article
NCID
AN00108241