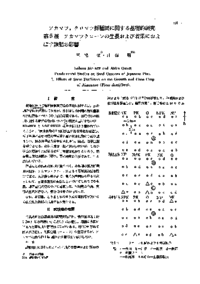 d0020015n035.pdf 1.74 MB
Description
The preliminary study was made on the seed garden to examine the effect of three major fertilizing elements to the cone production of Pinus densiflora. The test seed garden was established on the sandy flood plain in the cultivated area of the north-eastern part of Shimane Pref. Five clones of P. densiflora ( each clone 75 trees) were planted at intervals of 3.4m x 2.4m in March of 1962. The planting area was divided in NPK-, NP-, NK-, PK-, and control-plot (each with 3 replicas), and was fertilized every year since 1962. The growth of height and diameter were measured every year till 1965, the number of branches in 1965. The flowers and cones were examinde in spring and autumn of every year till 1966. The leaf analyses were made on N, P, and K in autumn of 1965. the results were as follows :
1. The N fertilizer was very effective for the tree growth and the cone production.
2. The percentage of N, P and K ( dry matter ) in needle leaaves which were collected from the well-growthed plots ( NPK, NP and NK ) showed smaller value than those of PK-and control-plot.
3. The cone production of a tree was related to the number of its branches.
4. Each clone showed its own characteristics in regard to the relation between tree growth and cone production, and common tendency was not seen among them.
Conclusively, it seems that N fertilizer is essentially needed in the early stage of seed garden establishment of P. densiflora on sandy soil, and is very effective for promoting treegrowth and cone production.
About This Article
NCID
AN00108241