A Consideration on the Design Method for Reinforced Concrete Pipes under Internal Pressure
Shirataki, Yamaji
File 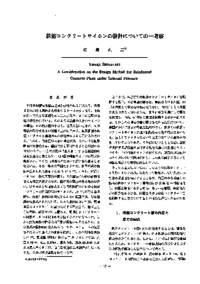 d0020015n044.pdf 1.01 MB
Description
Monolithic reinforced concrete pipes are usually preferred for relatively large siphons within a limit of the head of internal water pressure.
In this paper, some problems are discussed to find a rational method for designing such reinforced concrete pipes, and expressions for the stresses in the cylinder shell are derived on the basis of an approximate solution for the thick walled cylinder of concrete with circumferential reinforcement.
It is custmary to design the shell thickness of a cast-in-place pipe according to a conventional standard, such as suggested by Bureau of Reclamation. The numerical analyses are made to examine the propriety of above standard. The results show it is advisable to give a larger shell thickness than the standard to the pipes subjected to relatively high internal pressure.
A practical method is proposed for determining the shell thickness and reinforcemeht required for the concrete pipes under internal pressure. It is shown that the tensile strength of concrete is one of the most important factors in designing those pipes, and it will be desirable to investigate in detail the behaviour of concrete subjected to tensioning.
About This Article
NCID
AN00108241