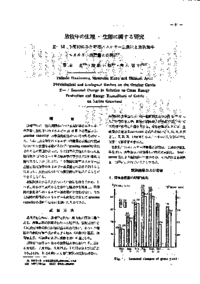 d0020015n018.pdf 1.19 MB
Description
From the grass yields and the chemical compositions monthly determined, we estimated the seasonal changes of the grass energy production on the native grassland from May to Octorber. On the other hand, the energy expenditures of grazing cattle were measured by beatmeter method, at the same period as grass sampling.
The grazing capacity of the native grasslands was calculated from the energy relationship between grass and grazing cattle.
The principal results obtained were as follows :
1) The maximum grass yield, 233kg/10ha on dry basis, was observed in August. It was over three times the minmum value in May.
2) Crude protein content in grass decreased from 12.7% to 7.3% on dry basis, and crude fiber content increased from 22.2% to 28.8% as the season progressed.
3) Grass energy productions ranged from a mimmum value of 1,725,000 Cal/ha in May to a maximum value of 5,195,000 Cal/ha in August.
4) The maximum grazing capacity of these grassland was estimated as 3.6 head/ha in August and in September, and only 1.3 head/ha in May.
About This Article
NCID
AN00108241