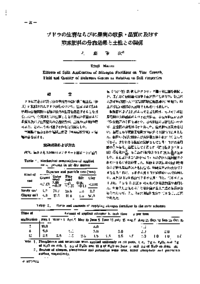 d0020015n005.pdf 731 KB
Description
Using 3-year-old fruiting Delaware grapes planted in pots with sandy and clayey soil, respectively, experiments were conducted to examine the effects of split application of a given amount of nitrogen fertilizer on vine growth, bunch yield and quality.
1. In sandy soil, vine growth increased and bunch yield markedly decreased with the increasing time of nitrogen fertilization from 3 to 12. Particulary, berry number per bunch which had the high conection with bunch yield was detrimentally affected by the increasing time of application.
2. In clayey soil, 6 times-application resulted in the best vine growth, though bunch yield tended to be a little higher with the increasing time up to 12.
3. In both soils, bunch quality based on soluble solids content and skin color became inferior in proportion to the fertilizer timing, accompanied by an increase in per cent foliar nirogen at both the stages of flowering and harvest.
About This Article
NCID
AN00108241