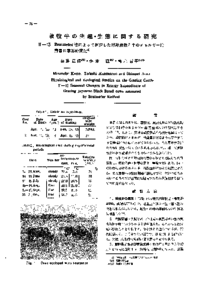 d0020015n017.pdf 1.5 MB
Description
The seasonal changes in energy expenditure of grazing cows were studied on Sambe native grassland in Shimane Prefecture from May to October, 1965. Two dry Japanese Black Breed cows, 8 and 10 years old, were used in this study.
The energy expedniture was indirectly measured by the beatmeter method.
The prircipal results obtained were as follows :
1. Daily heat production per kilogram of body weight was about 28 Cal. in late May, and it increased gradually until late summer. The maximum heat production (about 34 Cal.) was reached in the middle of August, and this value decreased a little in the middle of September. Late in October, the heat production decreased to an abnormally low value of about 20 Cal. The energy expenditure obtained in this experiment was somewhat lower than our data already reported, perhaps because the cows used in this experiment were rather old and were well experienced in grazing.
2. The ratio of rumination energy to grazing energy was the highest in August and the lowest in May and October. It suggested that the forage intake was large in August and small in May and October.
3. Cows gained body weight satisfactorily until September, but lost their weights in October. Considering the loss in body weight and abnormal decrement in energy expenditure in October, and for the conservation of grassland, we take a view that the most desirable grazirg period in this district is from early June to early October.
About This Article
NCID
AN00108241