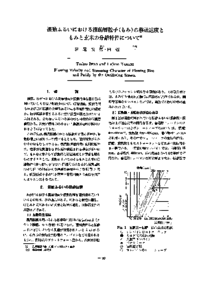 d0030006n016.pdf 1.79 MB
Description
This paper is experimental results on flowing velocity of paddy and screening character of paddy and rice by the screen, oscillating in the reciprocating, elliptical and circular motion. The four-bar linkage was adopted in order to oscillate the screen in that motion respectively.
The main results were as follws :
1) Oscillating screens used to the agricultural machinery have, in general, large amplitude and small frequency as in Fig (1).
2) The flowing velocities of paddy varied by the frequency, amplitude and angle of projection in the reciprocating motion, by the frequency, angle of projection, rate of amplitude (minor to major axis) and direction of rotation in the elliptical motion, and by the frequency, amplitude and direction of rotation in the circular motion, respectively.
3) On the screening of rice from the paddy, there were the optimum frequencies according to the feeding rate of each oscillating types of screen, and the screening rates of them decreased with the increase of feeding rate.
4) The maximum values of screening efficiency were 60-70%, though frequencies of that value were varied according to the oscillating types of screen. Also the screening efficiencies dcreased with the increase of the feeding rate.
5) The undersize recoveries were similar to the characteristics of screening rate of rice, and yet they increased with the increase of the length of screen. The coefficients of diffusion were decreased with the increase of the length of screen.
About This Article
NCID
AN00108015

d0030006n016.pdf 1.79 MB
Other Article
Effects of High Water Temperature on the Growth of Young Rice Plants in Relation to Temperature and Light Intensity Change/
PP. 1 - 5
On the Pathogenicity of Cochliobolus miyabeanus (S. Ito et Kurib.) Drechs. To several paddy-weeds/
PP. 6 - 9
Promotion of Berry Set in Grapes by Growth Retardants(I) : Comparison of the Effects of B-nine and CCC Applied as Shoot Spray and Cluster Dip on Berry Set and Shoot Growth in 'Kyoho' Grapes/
PP. 10 - 15
Production of Seedless Berries with GA in Muscat Bailey A Grapes(I) : Effects of the Timing, Concentration and Frequency of GA Application on the Seedlessness Ratio and Bunch Quality/
PP. 16 - 20
Karyological Studies on the Garden Hyacinthus(IV)/
PP. 21 - 28
Karyological Studies on the Garden Hyacinthus(V)/
PP. 29 - 38
Studies on the Selection Forest of Ate(Thujopsis dolabrata SIEB. Et ZUCC. Var. hondal MAKlNO)(5) : The growth of Maate even-aged uniform forest/
PP. 39 - 44
On the Relation Between the Various Kinds of Intercept Growth and Total-Height of Kuromatsu (Pinus thunbergii PARL.) Forest Trees/
PP. 45 - 48
Ultra-structure of fasciculated tissue of Phyllostachys bambusoides infected with Aciculosporium take/
PP. 49 - 52
Structure of the Interface between Wood and Synthetic Polymer(IV) : An Observation on Wood-Plastic Combination (WPC) by Scanning Electron Microscope/
PP. 53 - 60
Studies on the Improvement of Wooden Materials(IX) : Polymerization of Methyl Methacrylate into Karamatsu (Larix leptolepis Gordon)/
PP. 61 - 65
Studies on the Wood Gluing(X) : Influence of Surface Aging Prior to Gluing on Wettability and Gluability of Wood(Part 2)/
PP. 66 - 70
Noise and Vibration of the Ground and Structures Excited by External Forces(III) : Influence by Running Cars on Roads/
PP. 71 - 76
Geometric Surface of Soil Particles(2) : Determination of the Geometric Surface Area of Soil Particles by Microscopic Contour Line Method/
PP. 77 - 80
Side Skidding Performance of Rolling Tire(1) : Applicability of E. Fiala's Theory to the Side Force at the large Side Slip Angle/
PP. 81 - 89
Flowing Velocity and Screening Character of Flowing Rice and Paddy by the Oscillating Screen/
PP. 90 - 102
On the Vibration of Forestry Machine with 2 Cycle Gasolin Engine : Cases of Chain-Saw & Bush-Cutter/
PP. 103 - 108
On Noise Analysis of Hand Feed Planer/
PP. 109 - 111
Shimane Universyty Web Archives of kNowledge