Studies on the Wood Gluing(X) : Influence of Surface Aging Prior to Gluing on Wettability and Gluability of Wood(Part 2)
Sakuno, Tomoyasu
Goto, Teruo
Katsube, Riichi
File 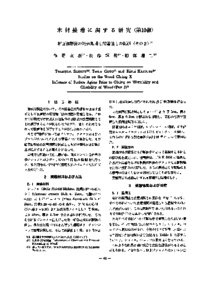 d0030006n012.pdf 518 KB
Description
The effect of surface aging prior to gluing on the wettability and gluability of wood have been investigated. For experimental materials, the heartwood of Shiinoki(Shiia sieboldi Makino), Kuri(Castanea crenata Sieb. et Zucc.)and Benimatsu(Pinus karaiensis Sieb. et Zucc.)were used. Immediately after machining the surface of lamina was exposed to the atomosphere but protected from the settling of airbone contaminate and exposure to light.
After a certain aging period, the wettability and gluability were determined. Ureaand resorsinol-formaldehyd resin adhesives, Polyvinyl acetate emulsion and casein glue were used for gluing. Some of the glued wood was treated with heat at 100℃ for 24 hours maintaining the moisture of wood at a constant level. The block shear strength test in air-dried condition was carried out on the treated and untreated specimens.
The results obtained are as follows :
1) The wettability and gluability did not vary with the lapse of aging period. It seemes that tannin in the wood of Shiinoki and Kuri affected the wettability and gluability.
2) The glue-joint strength of the heat-treated specimens was lower than the untreated specimens due to the deterioration of adhesives. Particularly, a remarkable degradation was observed on urea-formaldehyde resin adhesive.
3) The effect of aging period of lamina to the glue-joint strength of the heat-treated specimens showed a similar tendency in the case of the untreated specimens.
4) In the case of lamina of Shiinoki and Kuri stored for a long period, in the specimens glued with polyvinyl acetate emulsion or casein glue much delamination was observed. On the other hand, Benimatsu did not suffer delamination.
About This Article
NCID
AN00108015

d0030006n012.pdf 518 KB
Other Article
Effects of High Water Temperature on the Growth of Young Rice Plants in Relation to Temperature and Light Intensity Change/
PP. 1 - 5
On the Pathogenicity of Cochliobolus miyabeanus (S. Ito et Kurib.) Drechs. To several paddy-weeds/
PP. 6 - 9
Promotion of Berry Set in Grapes by Growth Retardants(I) : Comparison of the Effects of B-nine and CCC Applied as Shoot Spray and Cluster Dip on Berry Set and Shoot Growth in 'Kyoho' Grapes/
PP. 10 - 15
Production of Seedless Berries with GA in Muscat Bailey A Grapes(I) : Effects of the Timing, Concentration and Frequency of GA Application on the Seedlessness Ratio and Bunch Quality/
PP. 16 - 20
Karyological Studies on the Garden Hyacinthus(IV)/
PP. 21 - 28
Karyological Studies on the Garden Hyacinthus(V)/
PP. 29 - 38
Studies on the Selection Forest of Ate(Thujopsis dolabrata SIEB. Et ZUCC. Var. hondal MAKlNO)(5) : The growth of Maate even-aged uniform forest/
PP. 39 - 44
On the Relation Between the Various Kinds of Intercept Growth and Total-Height of Kuromatsu (Pinus thunbergii PARL.) Forest Trees/
PP. 45 - 48
Ultra-structure of fasciculated tissue of Phyllostachys bambusoides infected with Aciculosporium take/
PP. 49 - 52
Structure of the Interface between Wood and Synthetic Polymer(IV) : An Observation on Wood-Plastic Combination (WPC) by Scanning Electron Microscope/
PP. 53 - 60
Studies on the Improvement of Wooden Materials(IX) : Polymerization of Methyl Methacrylate into Karamatsu (Larix leptolepis Gordon)/
PP. 61 - 65
Studies on the Wood Gluing(X) : Influence of Surface Aging Prior to Gluing on Wettability and Gluability of Wood(Part 2)/
PP. 66 - 70
Noise and Vibration of the Ground and Structures Excited by External Forces(III) : Influence by Running Cars on Roads/
PP. 71 - 76
Geometric Surface of Soil Particles(2) : Determination of the Geometric Surface Area of Soil Particles by Microscopic Contour Line Method/
PP. 77 - 80
Side Skidding Performance of Rolling Tire(1) : Applicability of E. Fiala's Theory to the Side Force at the large Side Slip Angle/
PP. 81 - 89
Flowing Velocity and Screening Character of Flowing Rice and Paddy by the Oscillating Screen/
PP. 90 - 102
On the Vibration of Forestry Machine with 2 Cycle Gasolin Engine : Cases of Chain-Saw & Bush-Cutter/
PP. 103 - 108
On Noise Analysis of Hand Feed Planer/
PP. 109 - 111
Shimane Universyty Web Archives of kNowledge