Production of Seedless Berries with GA in Muscat Bailey A Grapes(I) : Effects of the Timing, Concentration and Frequency of GA Application on the Seedlessness Ratio and Bunch Quality
Ueda, Hisafumi
Sainoto, Yukio
Naito, Ryuji
File 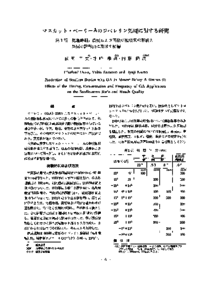 d0030006n004.pdf 1.52 MB
Description
Searching for a reliable measure in inducing parthenocarpy of Muscat Bailey A grapes，the effects of the timing, concentration and frequency of GA(gibberellic acid) application on the seedlessness ratio and bunch quality were studied from 1969 to 1971 at the vineyard of tbe experimental farm, Shimane University.
Dipping of clusters into 100 ppm solution of GA about 15 days before and 10 days after full bloom has been the established technique in Japan for the production of seedless Delaware grapes, by which almost all berries become seedless if the timing of the prebloom application is adequate.
This technique was not fit to Muscat Bailey A since the seedlessness ratio fractuated year by year from 94.5% to 78.5% despite the applications being conducted at the appointed date. When the prebloom treatment was applied earlier or later than the appointed date, the seedlessness ratio declined. The higher GA concentrations (200 and 300ppm) in the prebloom treatment were effective for raising the seedlessness ratio.
The most promissing method found in this investigation was the repeated prebloom applications (15 days at 100 ppm and again 8 days at 200 ppm before full bloom) with an ordinal after bloom application, by which the seedlessness ratio reached to 97.0% and the superior bunches in quality were produced. The only fault of the method was that it loosened too much the bunch resulting from the promoted elongation of peduncle and rachis.
On the other hand, it was observed in a portion of the seedless berries induced by any types of GA application that an abnormal tissue like a pit developed at the core, which was too hard to be eaten together with freshy pericarp. The appearance of the tissue may be connected with the seed abortion caused by the GA application though it has never been reported by others not only in the variety but also in Delaware grapes. The origin and histological characteristics of the abnormal tissue should be studied further.
About This Article
NCID
AN00108015

d0030006n004.pdf 1.52 MB
Other Article
Effects of High Water Temperature on the Growth of Young Rice Plants in Relation to Temperature and Light Intensity Change/
PP. 1 - 5
On the Pathogenicity of Cochliobolus miyabeanus (S. Ito et Kurib.) Drechs. To several paddy-weeds/
PP. 6 - 9
Promotion of Berry Set in Grapes by Growth Retardants(I) : Comparison of the Effects of B-nine and CCC Applied as Shoot Spray and Cluster Dip on Berry Set and Shoot Growth in 'Kyoho' Grapes/
PP. 10 - 15
Production of Seedless Berries with GA in Muscat Bailey A Grapes(I) : Effects of the Timing, Concentration and Frequency of GA Application on the Seedlessness Ratio and Bunch Quality/
PP. 16 - 20
Karyological Studies on the Garden Hyacinthus(IV)/
PP. 21 - 28
Karyological Studies on the Garden Hyacinthus(V)/
PP. 29 - 38
Studies on the Selection Forest of Ate(Thujopsis dolabrata SIEB. Et ZUCC. Var. hondal MAKlNO)(5) : The growth of Maate even-aged uniform forest/
PP. 39 - 44
On the Relation Between the Various Kinds of Intercept Growth and Total-Height of Kuromatsu (Pinus thunbergii PARL.) Forest Trees/
PP. 45 - 48
Ultra-structure of fasciculated tissue of Phyllostachys bambusoides infected with Aciculosporium take/
PP. 49 - 52
Structure of the Interface between Wood and Synthetic Polymer(IV) : An Observation on Wood-Plastic Combination (WPC) by Scanning Electron Microscope/
PP. 53 - 60
Studies on the Improvement of Wooden Materials(IX) : Polymerization of Methyl Methacrylate into Karamatsu (Larix leptolepis Gordon)/
PP. 61 - 65
Studies on the Wood Gluing(X) : Influence of Surface Aging Prior to Gluing on Wettability and Gluability of Wood(Part 2)/
PP. 66 - 70
Noise and Vibration of the Ground and Structures Excited by External Forces(III) : Influence by Running Cars on Roads/
PP. 71 - 76
Geometric Surface of Soil Particles(2) : Determination of the Geometric Surface Area of Soil Particles by Microscopic Contour Line Method/
PP. 77 - 80
Side Skidding Performance of Rolling Tire(1) : Applicability of E. Fiala's Theory to the Side Force at the large Side Slip Angle/
PP. 81 - 89
Flowing Velocity and Screening Character of Flowing Rice and Paddy by the Oscillating Screen/
PP. 90 - 102
On the Vibration of Forestry Machine with 2 Cycle Gasolin Engine : Cases of Chain-Saw & Bush-Cutter/
PP. 103 - 108
On Noise Analysis of Hand Feed Planer/
PP. 109 - 111
Shimane Universyty Web Archives of kNowledge