A Runoff Model for Prediction of Change in Runoff Pattern due to the Change of Hydrologic Environment
Fukushima, Akira
Takeda, Ikuo
Mori, Yasushi
File 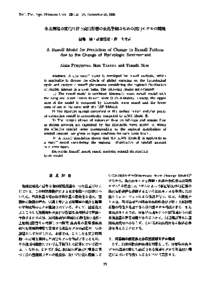 d0030029n004.pdf 1.04 MB
Description
A new runoff model is developed for runoff analysis，which is applicable to discuss the effects of global warming on the hydrological cycle and analyze a runoff phenomena considering the regional distnbution of rainfall amount in a river basin. The following results are obtained:
1）The runoff model is combined kinematic wave runoff model with the Long and Short Terms Runoff Model(LST-IIModel). Namely, the upper zone of the model is composed by kinematic wave model and the lower zone of one is the same with the LST-IIModel.
2）The effective rainfall concerned in the surface runoff and/or prompt subsurface runoff is automatically computed in KiWS Model II.
3）The routine phases of rainwater flow on hillslope and stream flow in stream network are expressed by the kinematic wave model，in which the effective rainfall series corresponding to the regional distribution of rainfall amount are given as input condition for each basin block.
4）A runoff simulation shows that the KiWS ModelII is applicable as a runoff model considering the regional distribution of rainfall amount in a river basin.
About This Article
NCID
AN00108015