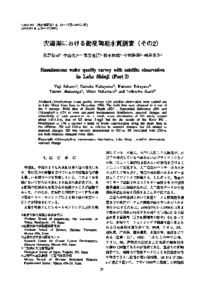 d0070004l005.pdf 2.18 MB
Description
Smultaneous water quality surveys with satellite observation were carried out in Lake Shinji from June to November 1996. The field data were obtained in 6 out of the 9 surveys. Field data of Secchi Depth (SD), Suspended Substance (SS) and Chlorophyll-a(Chl-a) were discussed instantaneous distribution, seasonal changes and relationship of each parameter. As a result, mean distribution of SD wholy ranged about 1.0-1.5m, that of SS about 5mg/l but for the mouth of the River Hii. Distribution of Chl-a showed a trend of lower concentration along the shore than in the offshore. SD and Chl-a had no relation to seasonal changes, but SS related to seasonal changes. SD was inversly proportionalto Chl-a. SS correlated with Chl-a, but both relations changed every time.
About This Article
NCID
AN10439529