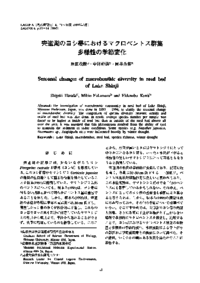 d0070004l003.pdf 3.06 MB
Description
The investigation of macrobenthic community in reed bed of Lake Shiji, Shimane Prefecture, Japan, was done in 1993-1994, to clarify the seasonal change of macrobenthic diversity. The comparison of species diversity between outside and inside of reed bed was also done. In result, average species number per sample was found to be higher at inside of reed bed than at outside of the reed bed almost all over the year. It was assumed that this phenomenon resulted from the ability of reed to maintain the sediment at stable conditions. Some species(e.g. Neanthes japonica, Notomastus sp., Amphipoda etc.) were influenced heavily by winter drought.
About This Article
NCID
AN10439529