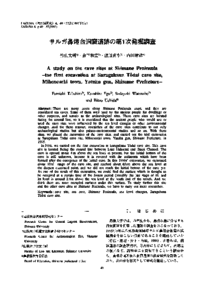 d0070004l007.pdf 5.52 MB
Description
There are many caves along Shimane Peninsula coast, and they are considered sea caves. Some of them were used by the ancient people for dwellings or other purposes, and remain as the archaeological sites. These cave sites are located facing the coastal line, so it is considered that the ancient people who would use or used the cave sites were influenced by the sea level changes or other environmental changes. And for these reasons, researches of the cave sites contribute to not only archaeological studies but also palaeo-environmental studies and so on. With these aims, we planed the excavation of the cave sites, and carried out the trial excavation at Sarugahana Todai cave site, Mihonoseki town, Yatuka gun, Shimane Prefecture, in 1995.
In 1996, we carried out the first excavation at Sarugahana Todai cave site. This cave site is located facing the coastal line between Lake Nakaumi and Sakai Channel. The cave is opened about 4 m above the sea level at present, but the initial bottom of the cave is still unknown, because it is covered with the sediments which have been formed after the emergence of the initial cave. In this 1996s' excavation, we excavated about 10m^2 range of the cave site, and reached about 65cm above the sea level at the deepest excavated point, and we did not reach the initial bottom of the cave yet. As one of the result of this excavation, we could find the surface which is thought to be occupied at a certain time of the Jomon period(possibly the late stage of it), and its level is around 2.4m above the sea level at the south end of the trench. And we think there are more occupied surfaces under this surface. To study further this site and the other cave sites at Shimane Peninsula, we have to carry out more researches.