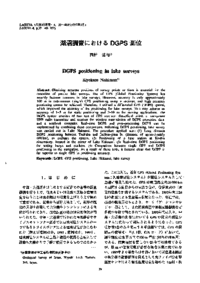 d0070004l006.pdf 3.54 MB
Description
Obtaining accurate positions of survey points or lines is essential for the execution of precise lake surveys. Use of GPS (Global Positioning System) has recently become common in lake surveys. However, accuracy is only approximately 100m in automonous (single) GPS positioning using a receiver, and high accuracy positioning cannot be achieved. Therefore, I utilised a differential GPS(DGPS) system, which improved the accuracy of the positioning for lake surveys. This may achieve an accuracy of 1-5 m for static positioning and 3-10 m for moving applications. The DGPS system consists of two sets of GPS receivers (base/fieid units), a low-power UHF radio transmitter and receiver for wireless transmission of DGPS correction data, and a notebook computer. Real-time DGPS and post-processing DGPS can be implemented by combining these components. Following DGPS positioning lake survey was carried out in Lake Nakaumi. The procedure applied was (1) Long distance DGPS positioning between Tsukuba and Daikon-jima Is. (distance of approximately 600km), to evaluate the system. (2) Positioning of a base station at Koshin observatory, located in the center of Lake Nakaumi. (3) Real-time DGPS positioning for setting buoys and markers. (4) Comparison between single GPS and DGPS positioning in the navigation. As a result of these tests, it became clear that DGPS is far superior to single GPS in positioning accuracy.
About This Article
NCID
AN10439529