A Discovery of a Corbicula Bed in the Holocene Sediments of Lake Shinji and Its Significance
Tokuoka, Takao
Nakamura, Tadashi
Sampei, Yoshikazu
File 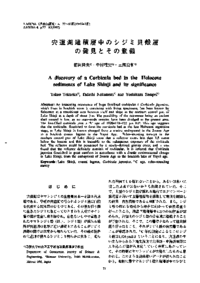 d0070004l010.pdf 3.66 MB
Description
An interesting occurrence of large fossilised corbiculas(Corbicula japonica, which lives in brackish water), coexisting with living specmens, has been known by fishermen at a transitional area between shelf and slope in the northern central part of Lake Shinji at a depth of about 3 m. The possibility of the occurence being an ancient shell mound is low, as no man-made remains have been dredged in the present area. The fossilified corbicula give a ^14C age of 1926＋124-122 yrs B.P. This age suggests that the corbiculas flourished to form the corbicula bed at the late Holocene regression stage, as Lake Shinji is known changed from a marine embayment in the Jomon Age to a brackish coastal lagoon in the Yayoi Age. Echo-sounding surveys in the northern central part of Lake Shinji show that a reflector exists less than 1.5 metre below the bottom and this is traceable to the subaqueous exposure of the corbicula bed. The reflector could be penetrated by a newly-devised gravity corer, and it was found that the reflector definitely consists of corbiculas. It is inferred that Corbicula japonica flourished in great numbers in accordance with a drastic environmental change in Lake Shinji, from the embayment of Jomon Age to the brackish lake of Yayoi age.
About This Article
NCID
AN10439529