The Relation between the Cognition of the Rarts of a Body and Mathematical Ability(I)
Nishi, Nobutaka
Nagashima, Kazu
Oka, Chitose
Sugimoto, Yoshiko
File 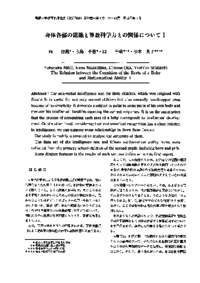 b005002302k005.pdf 1.96 MB
Description
The non-verbal intelligence test for little children, which was origined with Shochi S. is useful for not only normal children but also mentally handicapped ones because of its simplicity. It demands a subject to point to some parts of his own body and mesures his intellectual faculties counting the correct responses. It is on the assumption that the process of recognizing each part of a boby corresponds to intellectual development. On the other hand, considering that mathematical recognition has a close relation to intelligence, we can suppose some relationships in those three factors.
Our study is mainly attempted to analyse the structure of them.
The data set of the intelligence test and fifteen mathematical ability items were collected from the primary school children of the second grade, including boys and girls.
Some distinct features in the results of each test are indicated in this first report.
About This Article
NCID
AN0010792X

b005002302k005.pdf 1.96 MB
Other Article
On the Resultant Acievement Motivation of Under Achievers in Arithmetic Learning : A Study of Achievement Motivation in Mathematics Learning(XI)/
PP. 1 - 8
Eine morphologische Betrachtung uber die Bewegungsentwicklung der Rolle beim Kleinkind/
PP. 9 - 17
A Study of Achievement Motivation in Technological Education(III) : Attitudes toward Descriptive Geometry and its Change/
PP. 19 - 28
Studies on the Improvement of Teaching Method for Practical Lesson in Industrial Arts Education. I. A Trial of Woodwork Lesson by the Method of Sitting Directly on the Floor (zasiki type)/
PP. 29 - 35
The Relation between the Cognition of the Rarts of a Body and Mathematical Ability(I)/
PP. 37 - 46
A Study of Teacher's Questions in Teaching Reading Comprehension/
PP. 47 - 53
The Physical Handicapped and the Development of Personality/
PP. 1 - 26
A Study on Poetry Education(2)/
PP. 27 - 46
Shimane Universyty Web Archives of kNowledge