Student's Geographical Understanding of the Names and Locations in the World Countries
Hayashi, Masahisa
File 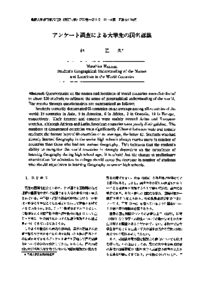 b005002201k002.pdf 2.16 MB
Description
Questionnaire on the names and locations of world countries were distributed to about 550 students to estimate the sense of geographical understanding of the world.The results through questionnaires are summarized as follows;
Students correctly demarcated 55 countries on an average among allcountries of the world; 19 countries in Asia, 9 in America, 6 in Africa, 2 in Oceania, 19 in Europe, respectively. Their interest and concern were mainly toward Asian and European coutries, although African and Latin American countries were poorly distinguished. The numbers of demarcated countries were significantly different between male and female students; the former beyond 60 countries on an average, the latter 43. Students who had already learned Geography in the senior high schools always marks more in number of countries than those who had not learned Geography. This indicates that the student's ability to recognize the world countries is strongly dependent on the experience of learning Geography during high school age. It is afraid that the change of preliminary examination for admission to college should cause the decrease in number of students who should experience in learning Geography in senior high schools.
About This Article
NCID
AN0010792X