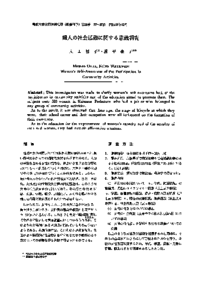 b005001800k007.pdf 1.76 MB
Description
This investigation was made to clarify women's self-awareness both of the participation in community activities and of the education aimed to promote them. The subjects were 523 women in Shimane Prefecture who had a job or who belonged to any group of community activities.
As to the result, it was observed that their age, the stage of lifecycle at which they were, their school career and their occupation were all influenced on the formation of their awareness.
As to the education for the improvement of women's capacity and of the equality of man and woman, they had notable affirmative opinions.
About This Article
NCID
AN0010792X

b005001800k007.pdf 1.76 MB
Other Article
Education of 'Environment and Resources' in Social Studies(I) : on the case of 'Resources and Energy' Studies/
PP. 1 - 11
An Experimental Study on the Education of 'Environment and Resources' in Social Studies(I) : Especially on the Case of Energy Education in 9th grade/
PP. 13 - 30
New Educational Thought and Dance Education : The Theory and Tamagawa Gakuen. Kuniyoshi Obara/
PP. 31 - 45
On the Laterality in the Lower Limbs upon the Occasion of Physical Activities/
PP. 47 - 54
Study on the Shot Putters in Junior High Schools of Shimane Prefecture(2) : on the Realities of Shot Put Technique/
PP. 55 - 66
Guidance of Clothing Education in Junior High School : the Case of Shimane Prefecture/
PP. 67 - 76
Women's Self-Awareness of the Participation in Community Activities/
PP. 77 - 87
Reconstructuring of Sex Education for Disabled Children/
PP. 89 - 96
Curricula for Preschool Children Considering the Relation of Ability to Physical Exercises to Intellectual Development/
PP. 97 - 109
Influence of Topics, Media, Subjects and Criteria on Persuasive Effectiveness of Fear Arousing Communications : An analysis of the Previous Studies/
PP. 111 - 127
Shimane Universyty Web Archives of kNowledge