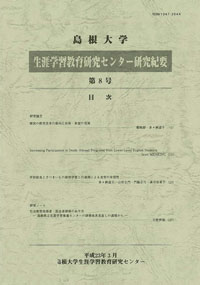 b008001k002.pdf 228 KB
Other Article
A Few Comments on ”Socratic Dialogue” as the Classroom Teaching Method in San-in Law School Plan/
PP. 1 - 14
The present Japanese language education in Shimane University and some related problems : A report on the necessity of a close connection between volunteer Japanese educational groups and Shimane University/
PP. 15 - 33
A Study on Self-directed Learning defined by P. C. Candy, which is based on Constructivism/
PP. 35 - 45
A Study of Educational Practices on the History of Musical Exchange between Japan and Korea : Consideration of International Understanding in a Lifelong Study Course/
PP. 47 - 61
The Family Lives Tasks as the Lifelong Education in the Adolescence/
PP. 63 - 74
The Study on the Living Environmental Education from the View-point of the Lifelong Learning/
PP. 75 - 84
The Problem of the Local School Board which takes Education Reform : Volunteer, the Organization making to secure the Participation of Habitant/
PP. 85 - 98
A Typology of Faculty Members toward University Extension at Shimane University/
PP. 99 - 111
Shimane Universyty Web Archives of kNowledge