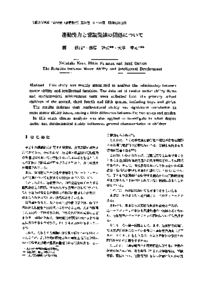 b005002100k008.pdf 1.2 MB
内容記述（抄録等）
This study was mainly attempted to analyse the relationship between motor ability and intellectual faculties．The data set of twelve motor ability items and mathematical achievement tests were collected from the primary school children of the second, third fourth and fifth grades, including boys and girles.
The results indicate that mathematical ability has significant correlation in some motor ability items, having a little difference between the two sexes and grades.
In this study cluster analysis was also applied to investigate to what degree motor and mathematical ability influences general characteristics of children.
About This Article
NCID
AN0010792X