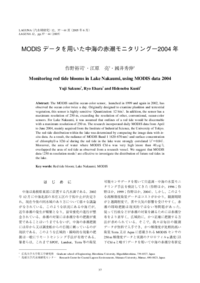 d0070012004.pdf 690 KB
内容記述（抄録等）
The MODIS satellite ocean-color sensor, launched in 1999 and again in 2002, has observed the ocean color twice a day. Originally designed to examine plankton and terrestrial vegetation, this sensor is highly sensitive(Quantization: 12 bits). In addition, the sensor has a maximum resolution of 250 m, exceeding the resolution of other, conventional, ocean-color sensors. For Lake Nakaumi, it was assumed that outlines of a red tide would be discernable with a maximum resolution of 250 m. The research incorporated daily MODIS data from April to June 2004, mainly acquired from the Institute of Industrial Science, the University of Tokyo. The red-tide distribution within the lake was determined by comparing the image data with insitu data. As a result, the radiance of MODIS Band 1(620-670 nm)and surface concentration of chlorophyll-a(Chl-a)during the red tide in the lake were strongly correlated(r^2＝0.84). Moreover, the area of water where MODIS Chl-a was very high(more than 40μg/l,overlapped the area of red tide as observed from a research vessel. We suggest that MODIS data(250 m resolution mode)are effective to investigate the distribution of future red tides in the lake.
About This Article
NCID
AN10439529