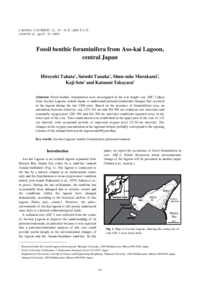 d0070012005.pdf 750 KB
内容記述（抄録等）
Fossil benthic foraminifera were investigated in the 4 m length core ASC 2 taken from Aso-kai Lagoon, central Japan, to understand paleoenvironmental changes that occurred in the lagoon during the last 1200 years. Based on the presence of foraminiferal taxa, an alternation between relatively oxic (221-241 cm and 301-381 cm sediment core intervals) and seasonally oxygen-poor (281-301 and 161-201 cm intervals) conditions repeated twice in the lower part of the core. Year-round anoxia was established in the upper part of the core (1-121 cm interval) with occasional periods of improved oxygen level (71-81 cm interval). The changes in the oxygen concentration at the lagoonal bottom probably correspond to the opening /closure of the channel between the lagoon and Miyazu Bay.
About This Article
NCID
AN10439529