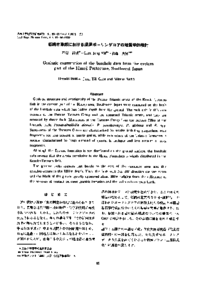 c005009011.pdf 1.41 MB
Description
Geologic structure and stratigraphy of the Permo-Triassic strata of the Kozuki-Tatsuno Belt in the eastem part of the Himeji area, Southwest Japan were examined on the basis of the borehole data which has1440m depth from the ground. The rock unit in this area consists of the Pemian Tatsuno Group and the unnamed Triassic strata, and they are repeated by thrust fault Mudstones of the Tatsuno Group from the horizon 735m of the borehole yield Pseudoalbaillella aidensis, P. yanaharensis, P. globosa and P. spp. Sandstones of the Tatsuno Group are characterised by wacke including plagioclase, rock fragments and less amount of quartz grains, while sandsotnes of the Triassic formation is arenite. characterised by large amound of quartz, K-feldspar and less amount of rock fragments.
Although the Triassic formation is not distributed on the ground surface, the borehole data reveals that the strata correlative to the Hiraki Formation is widely distributed in the Kozuki-Tatsuno Belt.
The granitic rocks appears just beside to the east of the examined area, and this granites occurs in the1200m depth. Thus, the fault with NE-SW direction cut the strata and the block of the ground greatly upheaved about 900m judging from the difference of the horizons of contact between granitic intrusion and the sediments in each block.
About This Article
NCID
AN00054980

c005009011.pdf 1.41 MB
Other Article
横山鼎教授,三梨昴教授略歴業績
PP. i - x
Compositional variation and morphological characteristics of amphibole grains in the Wakurayama andesite from Omisaki, Matsue
PP. 1 - 4
Compositional variation of F and Cl in zoned amphiboles from quartz diorites in the Daito-Yokota area, San-in belt, Southwest Japan/
PP. 5 - 8
Pink-colored epidote from the Sangun metamorphic rocks in the northeastem part of Mito-cho, Shimane Prefecture, Japan/
PP. 9 - 16
Clay mineraiogy on loess and the airbome dust over Japan/
PP. 17 - 27
Metamorphlsm of the Shitaai Formatioll in the Sangun belt, Wakasa area, central Japan/
PP. 29 - 36
Clasts of metamorphic rocks within the Eocene Kuma Group in the Kamegamori area, westem Shikoku, Japan/
PP. 37 - 47
Two metamorphic paths in the Tonaru epidote amphlbolite mass within the Sambagawa belt, Besshi district, central Shikoku/
PP. 49 - 54
Cretaceous igneous activity in and around Kisa-cho, Hiroshima Prefecture, Southwest Japan/
PP. 55 - 63
Radiolarian biostratigraphy and structure of the Permian Maizuru Group in eastem part of Yanahara area, Okayama Prefecture, Southwest Japan/
PP. 65 - 84
Geologic examination of the borehole data from the eastem part of the Himeji Prefecture, Southwest Japan/
PP. 85 - 90
Study of the pre-Jurassie terranes in and around the Okayama Prefecture, Southwest Japan/
PP. 91 - 96
Study on the correlation of the pyroclastie key beds in the Miura Group, Kanto district, Japan/
PP. 97 - 115
Pollen flora of bottom sediments from Lake Shinji/
PP. 117 - 127
Natural history of the Nakano-umi and Shinji Lakes XII. : Ostracode thanatocoenoces from the bottom deposits of Lake Nakano-umi and their historical distribution/
PP. 129 - 144
Natural history of the Nakano-umi and Shinji Lakes XIII. : Foraminiferal assemblages of the core samples from southeastern part of Lake Nakanoumi and their historical distribution/
PP. 145 - 158
Natural history of the Nakano-umi and Shinji Lakes XIV. : Diatom analysis of the boring core samples from Lake Shinji/
PP. 159 - 161
編集規約・投稿要領
PP. (162)
Shimane Universyty Web Archives of kNowledge