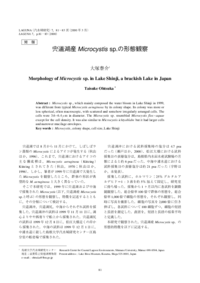 d0070007l011.pdf 163 KB
Description
Microcystis sp., which mainly composed the water bloom in Lake Shinji in 1999, was different from typical Microcystis aeruginosa by its colony shape. Its colony was more or less spherical, often macroscopic, with scattered and somehow irregularly arranged cells. The cells were 3.6-6.4μm in diameter. The Microcystis sp. resembled Microcystis flos-aquae except for the cell density. It was also similar to Microcystis ichtyoblabe but it had larger cells and narrower mucilage envelopes.
About This Article
NCID
AN10439529