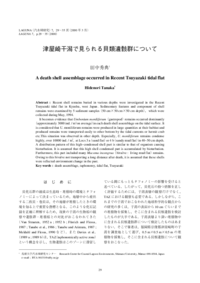 d0070007l004.pdf 253 KB
Description
Recent shell remains buried in various depths were investigated in the Recent Tsuyazaki tidal flat in Kyushu, west Japan. Sedimentary features and component of shell remains were examined by 5 sediment samples(50 cm×50 cm×50 cm depth), which were collected during May, 1994.
It becomes evidence that Umbonium moniliferum(gastropod) remains occurred dominantly (approximately 3000 ind. / m^2 on average) in each death shell assemblage on the tidal surface. It is considered that U. moniliferum remains were produced in large quantities at their habitat and produced remains were transported easily to other bottom by the tidal currents or hermit crab etc. This situation was observed in other depth. Especially, U. moniliferum remains condense highly, over 10000 ind. / m^2, at Locs 3 a(sand flat)or 4 b(sandy mud flat)in 40-50 cm depth. A distribution pattern of this high-condensed shell part is similar to that of organism causing bioturbation. It is assumed that this high shell condensed part is accumulated by bioturbation. Furthermore, this part included many Macoma incongrua(bivalve : living mud flat)remains. Owing to this bivalve not transporting a long distance after death, it is assumed that these shells were reflected environment change in the past.