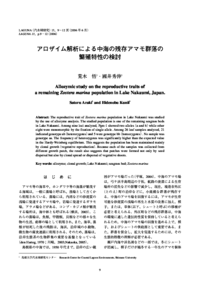 d0070013002.pdf 575 KB
Description
The reproductive trait of Zostera marina population in Lake Nakaumi was studied by the use of allozyme analysis. The studied population is one of the remaining seagrass beds in Lake Nakaumi. Among nine loci analyzed, Pgm-1 showed two alleles（a and b）while other eight were monomorphic by the fixation of single allele. Among 26 leaf samples analyzed, 21 indicated genotype ab（heterozygotes）and 5 were genotype bb（homozygotes）. No sample was genotype aa. The frequency of heterozygotes was significantly higher than the expected value in the Hardy-Weinberg equilibrium. This suggests the population has been maintained mainly by clonal growth（vegetative reproduction）. Because each of the samples was collected from different growth patch, the result also suggests that patches were formed not only by seed dispersal but also by clonal spread or dispersal of vegetative shoots.
About This Article
NCID
AN10439529