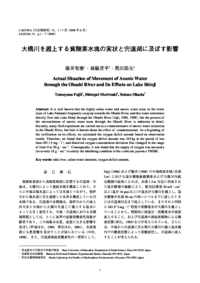 d0070013001.pdf 935 KB
Description
It is well known that the highly saline water and anoxic water mass in the lower layer of Lake Nakaumi frequently creep up towards the Ohashi River, and this water sometimes directly flow into Lake Shinji through the Ohashi River（fujii, 1996, 1998）, but the process of the encroachment of anoxic water mass through the Ohashi River is unknown in detail. Recently, many filed experiment are carried out as a countermeasure of anoxic water extinction in the Ohashi River, but little is known about the effect of countermeasure. As a beginning of the verification on its effects, we calculated the oxygen deficit amount based on observation results. Therefore, we found that the oxygen deficit amount was 242 kg in the period of less than DO 1.5 mg・l.1, and dissolved oxygen concentration deviation flux changed in the range of from 0 to 50 g・sec.1. Consequently, it was found that the supply of oxygen was necessary for several 10 g・sec.1 to satisfy the inhabiting condition of the corbicula japonica PRIME.
About This Article
NCID
AN10439529