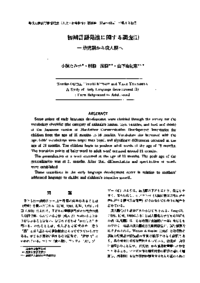 b002002600k004.pdf 1.02 MB
Description
Some points of early language development were clarified through the survey for the vocabulary checklist (the category of animals's names, toys, vehicles and food and drink) of the Japanese version of MacArthur Commuincative Development Inventories for children from the age of 1O months to 36 monhts. Vocabulary size increased with the age. Girls' vocabularys were larger than boys', and significant differences occurred at the age of 24 months. The children begin to produce adult words at the age of 15 months.
The transition points of baby word to adult word occurred around 21 months.
The generalization of a word occurred at the age of 12 months. The peak age of the generalization was at 21 months. After that, differentiation and specification of words were established.
These transitions in the early language development occur in relation to mothers' addressed language to childre and children's cognitive growth.
About This Article
NCID
AN00107952

b002002600k004.pdf 1.02 MB
Other Article
Policy on Sports in Uwa-cho, Higashiuwa-gun, Ehime Prefecture/
PP. 1 - 29
The Children's Image of Parents/
PP. 31 - 37
Emotion and Color/
PP. 39 - 56
A Study of Early Language Development(1) : From Baby-word to Adult-word/
PP. 57 - 63
The Educational-Clinical Aspects of Communication Disorder(I)/
PP. 65 - 74
The Clinical Psychological Study of the Child in the Institution : The Family Image in the Process of the Sand Play and the Play Therapy/
PP. 75 - 85
The Relationship between Psychological Distance and the Level of Embarrassment/
PP. 87 - 92
Children's Conception of Intelligence and Learning/
PP. 93 - 102
The Transmission,Study and Creation of a Culture of Writing for Global Co-existence and Progress : Through a Case Study of the Analysis of Tendency and Teaching of Learning of Hand Writing with the Younger Generation/
PP. 103 - 109
Gail M. Nomura, "Tsugiki, a Grafting : A History of a Japanese Pioneer Woman in Washington State"/
PP. 111 - 121
The Study of Councilmen(I) : on the Case of Matsue-city and Nita-county in Shimane Prefecture/
PP. 123 - 141
Birth of Fashionable Gods and Miraculous Experiences : On the Case of Yokohi (横樋) Kannon(Avalokitesvara)/
PP. 143 - 152
Color Tone of Vermilion (SHU) from Nishidani Historic Site of Yayoi Age, Izumo City/
PP. 153 - 166
Jaspers from Yayoi and Kofun Historic Sites, Izumo District : With Special Reference to Origin of Jasper on the Burial Materals from Historic Sites/
PP. 167 - 188
The Weather of the Days, the Dates of Writing of Miyazawa-kenji's HARU TO SYURA II : Data and Study/
PP. 1 - 86
A Study of Classifier (Liangci) in Documents Unearthed from Turfan Ancient Tombs/
PP. 87 - 102
A Study of the "Prophecy" in Masukagami (増鏡)/
PP. 103 - 114
The Transformation of the God of War : The Development of the Theory of War in Ancient China and the Image of Chi You (蚩尤)(1)/
PP. 115 - 131
Shimane Universyty Web Archives of kNowledge