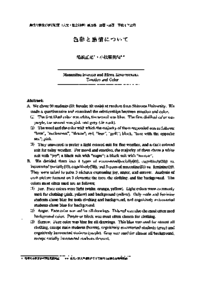 b002002600k003.pdf 2.71 MB
Description
A. We chose 90 students (50: female; 40: male) at random from Shimane University. We made a questiounaire and examined the relationships between emotion and color.
(1) The first liked color was white, the second was blue. The first disliked color was purple, the second was pink and gray (tie rank).
(2) The word and the color with which the majority of them responded was as follows: "love", "excitement", "shame"; red, "fear", "guilt"; black, "love with the opposite sex"; pink.
(3) They answered to prefer a light colored suit for fine weather, and a dark colored suit for rainy weather. For mood and emotion, the majority of them chose a white suit with "joy"; a black suit with "anger"; a black suit with "sorrow".
B. We devided them into 4 types of extroverted(socially(45), cognitively(36)) vs. introverted (socially(13), cognitively(20)), and 2 types of musculine(53) vs. feminine(29). They were asked to paint 3 pictures expressing joy, anger, and sorrow. Analysis of each picture focused on 3 elements; the face, the clothing, and the background. The colors most often used are as follows;
(1) Joy. Face colors were light (white, orange, yellow). Light colors were commonly used for clothing (pink, yellow) and background (yellow). Only male and feminine students chose blue for both clothing and background, and cognitively extroverted students chose blue for background.
(2) Anger. Face color was red for all drawings. This red was also the most often used background color. Purple or black was most often chosen for clothing
(3) Sorrow. Face color was blue for all drawings. This blue was used for almost all clothing, except male students (brown), cognitively extroverted students (gray) and coguitively introverted students (purple). Gray was used for almost all background, except socially introverted students (brown).
About This Article
NCID
AN00107952

b002002600k003.pdf 2.71 MB
Other Article
Policy on Sports in Uwa-cho, Higashiuwa-gun, Ehime Prefecture/
PP. 1 - 29
The Children's Image of Parents/
PP. 31 - 37
Emotion and Color/
PP. 39 - 56
A Study of Early Language Development(1) : From Baby-word to Adult-word/
PP. 57 - 63
The Educational-Clinical Aspects of Communication Disorder(I)/
PP. 65 - 74
The Clinical Psychological Study of the Child in the Institution : The Family Image in the Process of the Sand Play and the Play Therapy/
PP. 75 - 85
The Relationship between Psychological Distance and the Level of Embarrassment/
PP. 87 - 92
Children's Conception of Intelligence and Learning/
PP. 93 - 102
The Transmission,Study and Creation of a Culture of Writing for Global Co-existence and Progress : Through a Case Study of the Analysis of Tendency and Teaching of Learning of Hand Writing with the Younger Generation/
PP. 103 - 109
Gail M. Nomura, "Tsugiki, a Grafting : A History of a Japanese Pioneer Woman in Washington State"/
PP. 111 - 121
The Study of Councilmen(I) : on the Case of Matsue-city and Nita-county in Shimane Prefecture/
PP. 123 - 141
Birth of Fashionable Gods and Miraculous Experiences : On the Case of Yokohi (横樋) Kannon(Avalokitesvara)/
PP. 143 - 152
Color Tone of Vermilion (SHU) from Nishidani Historic Site of Yayoi Age, Izumo City/
PP. 153 - 166
Jaspers from Yayoi and Kofun Historic Sites, Izumo District : With Special Reference to Origin of Jasper on the Burial Materals from Historic Sites/
PP. 167 - 188
The Weather of the Days, the Dates of Writing of Miyazawa-kenji's HARU TO SYURA II : Data and Study/
PP. 1 - 86
A Study of Classifier (Liangci) in Documents Unearthed from Turfan Ancient Tombs/
PP. 87 - 102
A Study of the "Prophecy" in Masukagami (増鏡)/
PP. 103 - 114
The Transformation of the God of War : The Development of the Theory of War in Ancient China and the Image of Chi You (蚩尤)(1)/
PP. 115 - 131
Shimane Universyty Web Archives of kNowledge