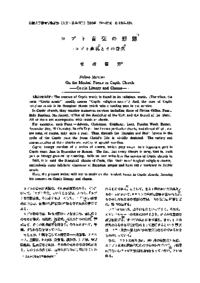 b002001000k008.pdf 1.4 MB
Description
The essence of Coptic music is found in its religious music. (Therefore, the term "Coptic music" usually means "Coptic religious music".) And, the core of Coptic religious music is its liturgical chants which take a leading part in the service.
In Coptic church, they practice numerous services including those of Divine Office, Feast, Holy Baptism, Matrimony, Office of the Anointing of the Sick and the Burial of the Dead. All of them are accompanied with music or chants.
For example each Feast-Advent, Christmas, Epiphany, Lent, Passion Week, Easter, Ascension Day, Whitsunday, Saint's Day-has its own particular chants and almost all of them are sung, of course, only once a year. Thus, through the liturgies and their hymns in the cycle of the Coptic year, the Jesus Christ's life is vividly depicted. The variety and characteristics of their chants are worthy of special mention.
Coptic liturgy consists of a series of chants, which play much more important part in Coptic mass than in Byzantine or Roman. The fact that every liturgy is sung, that is, each part of liturgy goes on by chanting tells us how melodious the service of Coptic church is.
Still, it is said the liturgical chants of Copts, like their non-liturgical religious chants, exclusively carry folkloric character of Egyptian proper and have little tendency to Arabic music.
Here, the present writer will try to study on the musical forms in Coptic church, focusing his concern on Coptic liturgy and chants.
About This Article
NCID
AN00107952