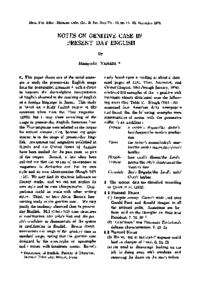 b002001000k006.pdf 1.64 MB
Description
This paper shows one of the serial attempts to study the present-day English usage from the pedagogical grammar with a desire to improve the short-sighted interpretation of English observed in the teaching of English as a foreign languagae in Japan. This study is based on a fairly limited corpus of 689 sentences taken from the Time magazine (1976), but it may show something of the usage in present-day English. Sentences from the Time magazine were selected as the corpus for several reasons : first, because my major interest is in the usage of present-day English, newspapers and magazines published in Britain and the United States of America have been studied for the past years as part of the corpus. Second, it has often been pointed out that the syntax of newspapers or magazines is distinctive and has its own style and its own idiosyncracies (Hough 1971:11). We may find its syntactic influence on literary works, and we can not neglect its own style and its own idiosyncracies. Comparisons could be made with other writing styles. Third, we have Alvin Baron's forerunning study of the genitive case. We may justify the tendency observed then in present-day English. Hill (1958 : 142) cites structures of modification like John's book and the people's candidate as characteristic of the system of modification in English. Bryant (1962) summarizes the usage of the genitive case in standard usage, stating that the genitive case designed by the apostrophe or apostrophe and s occurs with inanimate nouns. Baron's study based upon a reading of about a thousand pages of Life, Time, Newsweek, and Coronet (August, 1953 through January, 1954), disclosed 272 examples of the -s genitive with inanimate objects distributed over the following areas (See Table 1). Hough (1971 : 35) examined four American daily newspapers and found that the following examples were representative of nouns with the possessive suffix -'s as modifiers :<tt>
Tribune a master's degree/the doctor's bookkeeper/the world's production
Times the society's rooms/today's market/the earth's atmosphere/men's fertility
Herald- four week's illness/the Lord's
Tribune prayer/the city's department/the Yankee's loss
Chronicle Boy's Brigade/the Lord's task/Gray's harbor
</tt>
About This Article
NCID
AN00107952