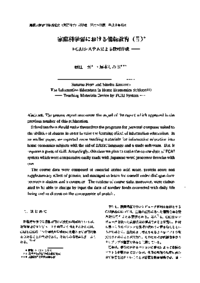 b005002500k007.pdf 1.92 MB
Description
The present report announces the sequel of the report which appeared in the previous number of this publication.
School teachers should make themselves the programs for personal computer suited to the abilities of student in order to raise the learing effect of infomation educaation. In an earlier paper, we reported some teaching materials for information education into home economics subjects with the aid of BASIC language and a trade soft-ware. But,it requires a great of skill. Accordingly, this time we plan to make the course data of FCAI system which were comparative easily made with Japanese word processor favorite with one.
The course data were composed of essential amino acid score, protein score and supplementary effect of protein, and managed to learn for oneself under dialogue form between a student and a computer. The contens of course data, moreover, were elabor ated to be able to change by input the data of another foods connected with daliy life liying and to discuss on the consequence of protein.
About This Article
NCID
AN0010792X