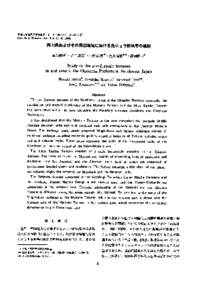 c005009012.pdf 777 KB
内容記述（抄録等）
The pre-Jurassic terranes of the Southwest Japan in the Chugoku Province especially, the distribution and mutual relationship of the Maizuru Terrane and the Ultra-Tamba Temne has been examined in the area including the boundary between Hiroshima and Okayama Prefectures.
It has deciphered that the Maizuru Temne in the area comprises the probable Middle Permian melange units and well stratified rock unit corresponds to the Permian Maizuru Group. The melange units, newly proposed Muginokusa and Sabara melanges consist of mudstone melange including mylonitic gabbro, ophiolitic breccias of Yakuno ophiolite origin and acid volcanic rocks. These rocks represent the slabs of the component rocks of the island-arc（or back arc origin）of the Paleo-Maizuru sea.
The Ultra-Tamba Terrane consists of 3 units tectonically underlies to the Maizuru Terrane. The three units are the Miyama unit mainly of altemating beds of sandstone and mudstone, and the Nanatani and the Himetani units both of which are composed of greenstones, bedded cherts and mudstones. The Sabara melange, a thin sliver of the islandarc volcanic origin, hes between the Himetani and the Nanatani units.
The Akiyoshi Terrane composed of the Kurohagi Formation (upper Middle Permian) and the overlying Triassic Nariwa Group in the eastem area, and the Permo-Carboniferous limestones in the westem area. Tectonic relationship of the Akiyoshi and the Maizuru Terrane is different among the areas, namely, the Akiyoshi Terrane lies to the north of the Muginokusa melange of the Maizuru Terrane, while in the westem part it thrust over the Yamano unit of the Maizuru Terrane in the eastem part, which represents the secondary deformation in pre-Cretaceous time.
About This Article
NCID
AN00054980