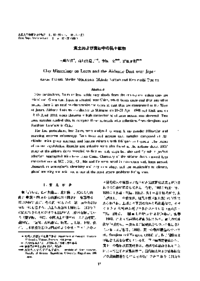 c005009005.pdf 1.99 MB
内容記述（抄録等）
Fine particulates, 2μm or less, settle very slowly from the atmosphere unless they are rained out. Given that Japan is situated near China, which bums more coal than any other nation, there is an need to characterize the types of dust that are transported to the West of Japan. Airbone dusts were collected in Shimane, on 21-22 April, 1988 and 1989, and on 12-13 April, 1990, when abnormally high concentration of loess aerosol was observed. Two loess samples studied also, to compare these materials with collections from chenjiawo and Southem Lanchow in China.
The fine particulates, less 2μm, were analyzed by. using X-ray powder diffraction and scaming electron microscopy. Both loess and airbone dust samples cornposed of Alchlorite, mica group minerals, and kaoline minerals with feldspars and quartz. The traces of calcite, crystobalite, ilmenite and ankerite were also found in the airbone dusts. SEM study of the airbone dusts revealed to find not only clays but also coal fly ash, aperfect adsorber, aggregated with loess from China. Chemistry of the airbone dusts showed high concentrations of SO^(2-)_4, NO^-_3, Cl^-, Mn and Fe were noted in association with loess aerosol. Research in atmospheric chemistry and clay mineralogy, and the relationship to climate, global warming and acid rain is one of the most urgent problems facing man.
About This Article
NCID
AN00054980