The Finding of Some Diatom Species, Which are Known as Brackish Species, from Hyper-saline Inland Lakes in Turkey
鹿島 薫
ファイル 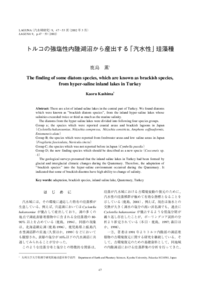 d0070009l005.pdf 293 KB
内容記述（抄録等）
There are a lot of inland saline lakes in the central part of Turkey. We found diatoms which were known as brackish diatom species, from the inland hyper-saline lakes whose salinities exceeded twice or third as much as the marine salinity.
The diatoms from the hyper-saline lakes were divided into following four species groups.
Group a ; the species which were reported coastal areas and brackish lagoons in Japan (Cyclotella hakanssoniae, Nitzschia compressa, Nitzschia constricta, Amphora coffeaeformis, Entomoneis alata)
Group B; the species which were reported from freshwater areas and low saline areas in Japan (Fragilaria fasciculata, Navicula cincta)
Group C; the species which was not reported before in Japan(Cymbella pussila)
Group D; the new finding species which should be described as a new specie(Cocconeis sp.-1)
The geological surveys presumed that the inland saline lakes in Turkey had been formed by glacial and interglacial climatic changes during the Quaternary. Therefore, the adaptation of brackish species into the hyper-saline environment occurred during the Quaternary. It indicated that some of brackish diaotms have high ability to change of salinity.