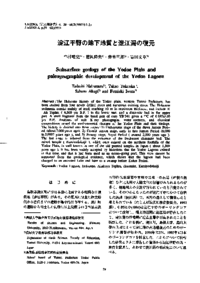 d0070004l008.pdf 2.63 MB
内容記述（抄録等）
The Holocene history of the Yodoe plain western Tottori Prefecture, has been studied from four newly-drilled cores and numerous existing cores. The Holocene sediments consist mainly of mud, reaching 10 m in maximum thickness, and include K-Ah Tephra (6,300 yrs B.P.) in the lower part, and a diatomite bed in the upper part. A shell fragment from the basal part of core YB 941 gives a ^14C of 6,885±130 yrs B.P. Analyses of soft X-ray photographs, water-contents, and chemical compositions reveal the environmental changes of the Yodoe Plain and their timings. The history is divided into three stages : 1) Embayment stage of the dawn Jomon Period (about 7,000 years ago), 2) Coastal lagoon stage, early to late Jomon Period (6,000 to 3,000? years ago ), and 3) Swamp stage, Yayoi Period (around 2,000 years ago ). The last stage is inferred from the existence of the freshwater diatomite bed. The ruined temple(Kamiyodohaiji), which once existed on the northern foothills of the Yodoe Plain, is well known as one of the old painted temples in Japan (about 1,300 years ago). It has been widely accepted by historians that the Yodoe Lagoon existed at that time, and that it had been used as an ocean-going port. This view cannot be supported from the geological evidence, which shows that the lagoon had been changed to an enclosed Lake and later to a swamp before Kofun Period.
About This Article
NCID
AN10439529