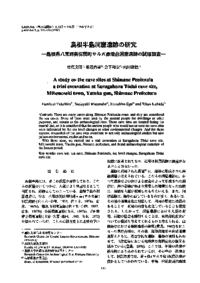 d0070003l014.pdf 6.51 MB
内容記述（抄録等）
There are many caves along Shimane Peninsula coast, and they are considered the sea caves. Some of them were used by the ancient People for dwellings or other purposes, and remain as the archaeological sites. These cave sites are located facing the coastal line, so it is considered that the ancient People who would use or used the cave sites were influenced by the sea level changes or other environmental changes. And for these reasons, researches of the cave sites contribute to not only archaeological studies but also palaeo-environmental studies and so on.
With these aims, we carried out a trial excavation at Sarugahana Todai cave site, Mihonoseki town, Yatuka gun, Shimane prefecture, and found archaeological materials of the Jomon period.