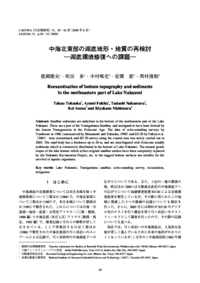 d0070013004.pdf 2.24 MB
内容記述（抄録等）
Sandbar sediments are underlain in the bottom of the northeastern part of the Lake Nakaumi. These are a part of the Yumigahama Sandbar, and assingned to have been formed by the Jomon Transgression in the Holocene Age. The data of echo-sounding surveys by Yuniboom in 1986（summarized by Mitsunashi and Tokuoka, 1990）and SH 20 by Fukita et al. （2001）were reexamined, and SH 20 survey along the coastal area was newly carried out in 2005. The sand body has a thickness up to 20 m, and are interfingered with Holocene muddy sediments which is extensively distributed in the bottom of Lake Nakaumi. The natural gentle slopes of the lake bottom which reflect original sandbar surface have been completely replaced by the Nakaumi Reclamation Project, etc. to the rugged bottom surfaces not suitable for the survival of aquatic organisms.
About This Article
NCID
AN10439529