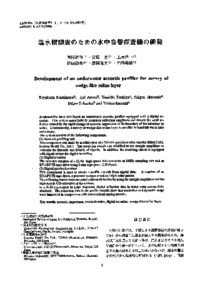 d0070001l002.pdf 2.66 MB
内容記述（抄録等）
We have developed an underwater acoustic profiler equipped with a digital recorder. This system quantitatively measures reflection amplitude and detects the weak reflector caused by the rapid change of acoustic impedance at the boundary of the halocline in water. Consequently, a survey of wedge-like saline layer is possible in brackish water lake and estuary.
The system consists of the following components.
(1) Acoustic profiling unit
This component was made by modification of a 200kHz precision echo sounder (Model 101, Senbon Denki Co., Ltd.). The receiving circuit was modified to use straight amplifiers to maintain the linearity and fidelity of signals. In addition, the receiving circuit is equipped with signal output for digital recording.
(2) Digital recorder
The recorder consists of a 12 bit high-speed A/D converter at 1MHz sampling rate and an EXABYTE tape drive using 8 mm tape (max. 2.2GByte).
(3) Digital playback system
This component is used to obtain a profile records from digital data. It consists of an EXABYTE tape drive, a personal computer and an inkjet color printer.
The reflecting waves were recorded without distortion by using the straight amplifiers and the high-speed A/D converter of the system.
In a field experiment in Lake Nakaumi, digital reflection data in water were successfully obtained. The reflection data in the profile records show that resolution and dynamic range were improved in comparison with conventional analog records.
Key words: acoustic impedance, brackish water, digital recorder, wedge-like saline layer
About This Article
NCID
AN10439529