On Minerals Associated with Ultrabasic Rocks, Found in the Vicnity of Common Boundaries of Shimane ,Tottori,Okayama and Hirosima Prefectures(III) : Prehnite and Tourmaline(Dravite)from the Hirose Chromite Mine,Tottori Prefecture
Kitahara, Jun-ichi
File 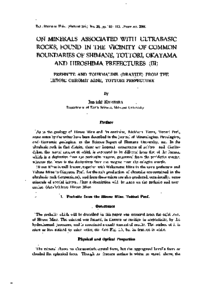 b012016b009.pdf 1.41 MB
Description
As to the geology of Hirose Mine and its environs, Nichinan Town, Tottori Pref., some notes by the writer have been described in the Journal of Mineralogists, Petrologists, and Economic geologists, in the Science Report of Shimane University, etc.. In the ultrabasic rock in that district, there are frequent occurrences of gabbro- and dioritedykes, the parent magma of which is supposed to be different from that of the former, which is a derivative from the peridotite magma, generated from the peridotite mantle, whereas the latter is the derivatives from the magma from the eclogite mantle.
Hirose Mine is well known, together with Wakamatsu Mine in the same prefecture and Takase Mine in Okayama Pref., for the rich production of chromite ore contained in the ultrabasic rock (serpentinite), and from these mines are also produced, occasionally, some minerals of special interest. Here a description will be made on the prehnite and tourmaline (dravite) from Hirose Mine.
About This Article
NCID
AN0010814X

b012016b009.pdf 1.41 MB
Other Article
The estimate Procedures after a Preliminary multivariate nonparametric Two-Sample test/
PP. 1 - 11
System of Local Loops on a Manifold and Affine Connection/
PP. 12 - 14
A Probable Magnetic Behaviour for Cr_2F_5/
PP. 15 - 19
Palaeomagnetism on the Environs of Cape Kawajiri/
PP. 20 - 26
On Same Applications of Fluid Devices/
PP. 27 - 44
On the Preparation of Magnetic Metal-Oxides for Tape-Recording/
PP. 45 - 89
Studies on the Blackish Substance found in Wasabi afflicted with Black Leg Disease (Eutrema Wasabi Marim)(1) : On the Tyrosinase Activity of Phoma Wasabiae Yokogi/
PP. 90 - 97
The molecular interction observed in the specific volume of orgnic binary mixtures/
PP. 98 - 105
On Minerals Associated with Ultrabasic Rocks, Found in the Vicnity of Common Boundaries of Shimane ,Tottori,Okayama and Hirosima Prefectures(III) : Prehnite and Tourmaline(Dravite)from the Hirose Chromite Mine,Tottori Prefecture/
PP. 106 - 116
Growth of Mold on Vegetable Dyestuffs/
PP. 117 - 125
Soil Algal of γ-Irradiated Field and Natural Strongrly Radioactive District in Japan/
PP. 126 - 134
Two Species of the fresh-water shrimps from Thailand/
PP. 135 - 144
A Study on the Draught-Mechanism of the Draught Animal : On the Posture, Especially the Forward-Leaning Posture(Zenkei-Shisei)in Draught/
PP. 145 - 175
Shimane Universyty Web Archives of kNowledge