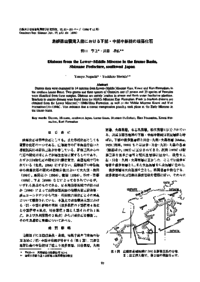 c006015016.pdf 1.64 MB
Description
Diatom flora were examined in 14 samples from Lower-Middle Miocene Hata，Kawai and Kuri Formations in the southern Izurno Basin. Two genera and three species of Centrales and 17 genera and 33 species of Pennales were identified from these samples. Diatoms are mainly benthos in stream and fresh water facultative plankton. Brackish to marine diatoms were found from the Middle Miocene Kuri Forrnation. Fresh to brackish diatorns are obtained from the Lower Miocene (-19Ma) Hata Formation, as well as the Middle Miocene Kawai and Kuri Formations (16-15Ma). This indicates that a marine transgression possibly took place in the Early Miocene in the Izumo basin.13;
About This Article
NCID
AA11455176