Pictures of bottom surface in the central part of Lake Nakaumi (part 5) : dynamics of bottom water in the time of seasonal change from winter to spring
Nomura, Ritsuo
Seto, Koji
Takata, Hiroyuki
File 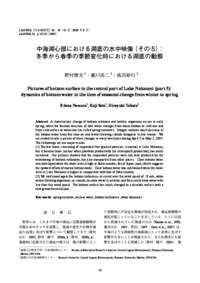 d0070016004.pdf 2.84 MB
Description
A characteristic change of bottom sediment and benthic organisms occurs in early
spring, when the thermal structure of lake water changes from warm bottom to cold one and from cold surface to warm one (so-called spring turnover). Oxygen contents much decrease in the bottom water from this time on and winter-thriving cionids disappear in this season. We succeeded to take a picture of these changes in every two hours during April 5 to May 2, 2007.
The followings are our major results:
(1) Unclear water, consisting of suspended fine-grained particles, is normal in Lake Nakaumi, but it became more unclear when plankton productivity (as chlorophyll production) has much increased. Our pictures showed that the suspended particles were not only produced by the winnowing of bottom sediments, but also transported from other places. Clear bottom water was developed while the water level is high in Sakai-minato, Sea of Japan coast, which suggests the upward inflow of marine bottom water. Clear bottom water was not formed while the water level in Lake Nakaumi is higher in comparison with that of Sakai-minato.
(2) We confirmed again the bottom turbulence occurred over the wind speed of 10 m/s, when winter-thriving organisms, as cionids, become weak in activity, and then easily blew away with less than this wind speed. The bottom surface has much changed to a desolate surface with a new grown bacterial mat.
About This Article
NCID
AN10439529