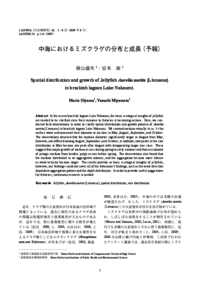 d0070016001.pdf 714 KB
Description
In the recent brackish lagoon Lake Nakaumi, the basic ecological insights of jellyfish
are needed to be clarified since their nuisance to fisheries is becoming serious. Here, we conducted field observations in order to clarify spatial distribution and growth patterns of Aurelia aurita (Linnaeus) in brackish lagoon Lake Nakaumi. We counted medusa visually in ca. 5×5m surface water and measured their diameter at six sites in May, August, September, and October. The observations detected that the medusa diameter significantly larger in August than May, however, not differed among August, September, and October, in addition, two peaks in the size distribution in May became one peak after August with disappearing larger size class. These suggest that major growth of medusa occurs during spring to early summer and that recruitment of pelagic medusa from benthic polyp occurs before spring. The observations also found that the medusa distributed in an aggregative manner, and the aggregation became more intense as wind velocity became larger. The results provide us basic ecological insights of jellyfish, however, our findings could not cover all of the fishermen’s findings, such as the wind direction dependent aggregation pattern and the depth distribution. In order to provide useful suggestions for fisheries, continuous research is needed.
About This Article
NCID
AN10439529