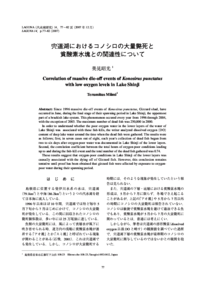 d0070014009.pdf 361 KB
Description
Since 1996 massive die-off events of Konosirus punctatus, Gizzard shad, have occurred in June, during the fi nal stage of their spawning period in Lake Shinji, the uppermost part of a brackish lake system. This phenomenon occured every year from 1996 through 2004, with the exception of 2003. The maximum number of dead fi sh was 250,000 in 2000.
In order to understand whether the poor oxygen water in the lower layers of the water of Lake Shinji was associated with these fi sh-kills, the writer analyzed dissolved oxygen（DO） content of deep lake water around the time when the dead fi sh were gathered. The results were as follows; first, in seven cases out of eight, each year’s collection of dead fish began from two to six days after oxygen-poor water was documented in Lake Shinji of the lower layers. Second, the correlation coeffi cient between the total hours of oxygen-poor conditions leading up to and during the fi sh-kill event and the total number of the dead fi sh gathered was 0.74.
These results suggest that oxygen-poor conditions in Lake Shinji of the lower layers was causally associated with the dying off of Gizzard fish. However, this conclusion remains tentative until proof has been obtained that gizzard fi sh were affected by exposure to oxygenpoor water during their spawning period.