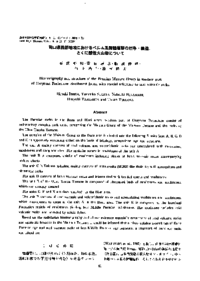 c005008007.pdf 2.72 MB
内容記述（抄録等）
The Permian rocks in the Ibara and Bisei areas, westem part of Okayama Prefecture consist of sedimentary complex rock units, comprising the Maizuru Group of the Maizuru Terrane and the rocks of the Ultra-Tamba Terrane.
The complex of the Maizuru Group in the Ibara area is divided into the following5units (unit A, B, C, D and E in apparently ascending order) on the basis of lithology, composition, age and structure.
The unit A mainly consists of acid volcanic and volcaniclastic rocks and intercalated with mudstones, sandstones and conglomerates. The ophiolite occurs in mudstones of the unit A.
The unit B is composed chiefly of mudstone including blocks of basic volcanic rocks accompanying bedded cherts.
The unit C is Yakuno ophiolite, mainly consists of metabasalts (MORB-like tholeiite) with metagabbro and ultramafic rocks.
The unit D consists of basic volcanic rocks and intercalated with bedded cherts and mudstones.
The unit E of the Ultra-Tanba Tarrane is composed of altemated beds of sandstones and mudstones, which are strongly sheared.
The units E, F and K are discrimimted in the Bisei area.
The unit F consists of acid volcanic and volcaniclastic rocks and intercalating mudstones and sandstones, which corresponds to those of the unit A in the Ibara area. The unit K is composed of the Kurohagi Formation mainly of mudstones yielding late Middle Permian radiolarians. The mudstone includes acid volcanic rocks, and intruded by acidic dykes.
Based on the radiolarian biostratigraphy and above evidence especially occurrence of acid volcanic rocks and ophiolitic breccias in the Maizuru Terrane, it could be inferred that a rifted−ophilite assemblage of Early Permian age and acid volcanic rocks of late Middle Permian age represent a fragment of back arc basin and island arc.
About This Article
NCID
AN00054980